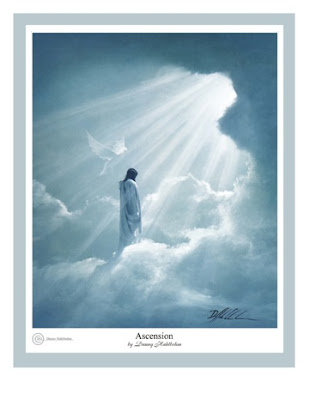 In my previous post titled, "Ongoing Earthly Ministry of Jesus" (see here), I wrote about how the ministry of Jesus on earth continued after his resurrection, and continues even now, as we hear testimonies from around the world of His appearances in our own day.  I also spoke about His ascension.  Based on my very thorough research of the matter in the Scriptures, I came to the personal conclusion that there must have been two ascensions.  In other words, Christ must have first ascended privately on resurrection day, without any human audience on earth to witness it.  And then he came back to earth later that day to appear to His disciples, and continued to make many appearances for forty days until he ascended to heaven in full view of them all.  But I didn't want to start teaching something I could not be sure of, so I merely stated it in parentheses as a side note that I found interesting.  Here's what I wrote:

This is the only recorded instance where Jesus told anyone not to cling to Him.  Only a few hours later, he specifically told His disciples in the locked room to touch Him.  Luke states: “But they were startled and frightened and thought that they were seeing a spirit. And He said to them, ‘Why are you troubled, and why do doubts arise in your hearts? See My hands and My feet, that it is I Myself; touch Me and see, for a spirit does not have flesh and bones as you see that I have.’"  (Luk 24:37-39). Some believe that Jesus ascended privately to the Father shortly after he rose on that first day, in order to be glorified, and a change occurred in His body.  This, they believe, was prior to the public ascension seen by his disciples forty days later, and explains why He allowed no one to touch Him until later during the day of His resurrection.

If it were true that Jesus ascended privately on resurrection day, then it would also explain why Jesus said to Mary that first morning that she was to tell His disciples that He was ascending to His Father and God.  If He did not ascend twice, the first time being soon after his resurrection, then we need to explain why He said on resurrection day that He was ascending to the Father.  Was He referring to the public event that would occur forty days hence?  It’s an interesting matter to consider, but certainly not an essential belief for our salvation.

That is an excerpt of the article I posted last December, which was nine months prior to writing this present article.

He Stripped satan of his authority
The Scripture says of Jesus, "Having stripped rulers and authorities, He made a show of them publicly, triumphing over them in it." (Col 2:15) And this is exactly what happened!  Hallelujah!  Our enemy is a defeated foe, who stands condemned already.

Multiple Descents and Ascents
It may seem radical to talk about two ascensions, since we have always been taught that there was only one ascension of Christ -- that is, of course, the public one recorded in Acts 1:3.  However, it would not surprise me, if Jesus actually ascended to heaven multiple times, during the forty days after his resurrection, following each of His appearances.  Allow me to explain.

He appeared to His disciples on earth alive at least three times before the appearance He made on the day He ascended publicly to heaven (Jn 21:14).  The first was to Mary (Jn 20:10-18), then to Peter and the twelve in the upper room (Jn 20:19; 1 Cor 15:5), then a third time to the disciples at the Sea of Tiberias (Jn 21:1).  "After that He appeared to more than five hundred brethren at one time...then He appeared to James, then to all the apostles." (1Co 15:6-7).  If you count all of these appearances, there may have been as many as six of them!

We know that Jesus did not cease to exist each time He disappeared, because He lives (see Jn 14:19), therefore, we know that He continued to live somewhere.  So we need to ask, "Where did He go?" Well, we know that from the time of His resurrection, His home was in heaven, not on earth. For according to His own words to His disciples, they would no longer see Him, because He was going to the Father, although He did assure them that they would see Him again after a little while (see Joh 14:19; Joh 16:10,16).  And according to His own words to Mary, after He spoke with her, He ascended to the Father in heaven.  And He sat down at the right hand of God.  But He must have descended each time He appeared to people on earth, and then ascended back to His home in heaven afterward.  He certainly wasn't camping out by Himself on earth for forty days.  So this means there may have been six ascensions, culminating with the public one that was seen on top of the Mount of Olives by those who returned to the upper room where they were staying; that is, "Peter and John and James and Andrew, Philip and Thomas, Bartholomew and Matthew, James the son of Alphaeus, and Simon the Zealot, and Judas the son of James...along with the women, and Mary the mother of Jesus, and with His brothers." (Act 1:13-14)

And since Jesus continues to appear to people on earth today, He continues to descend to earth each time He does so, and then He ascends back to heaven each time afterward, even though they don't see Him do so.

Putting it All Together
You may not agree with my findings, and you don't have to.  But this was the conclusion I had come to through my own, independent study of God's Word.  I believe there was a private ascension of Jesus Christ on resurrection day, and another one that was seen publicly by His disciples only ten days before Pentecost.  There were also likely several other private ascensions between these two.  Likewise, Christ has descended and ascended many times since then.

Jesus has overcome sin, sickness, disease, and death for us, and has stripped satan of His authority through the cross. Indeed, He has overcome the world.  If you need forgiveness, healing, deliverance or salvation today, it is available for you right now!  God wants you to be forgiven, cleansed of sin, saved, healed, and completely delivered of bondage in your life.  Don't live another minute without having your need met by Jesus.  Call upon Him and cry out to Him in your place of need.  He cares and will answer your cry.

Author's note:  I also encouraged you to read "Understanding the Gaps in Scripture" and "Ongoing Earthly Ministry of Jesus."  You may also access the Main Directory for this blog, or my complete blog directory at Writing for the Master.

Attribution notice: Most Scripture quotations taken from the NASB. "Ascension" painting © 2012 Danny Hahlbohm, all rights reserved by the artist.

Now I'd like to ask a very important question.

Do You Want to Know Him?
If you want to know Jesus personally, you can. It all begins when you repent and believe in Jesus.  Do you know what God's Word, the Bible says?

Please see my explanation of this in my post called "Do You Want to Know Jesus?"

Len Lacroix is the founder of Doulos Missions International.  He was based in Eastern Europe for four years, making disciples, as well as helping leaders to be more effective at making disciples who multiply, developing leaders who multiply, with the ultimate goal of planting churches that multiply. His ministry is now based in the United States with the same goal of helping fulfill the Great Commission. www.dmiworld.org.
Posted by Len at 11:00 AM